Showing posts from September, 2018
Show all

Why do we judge when we don’t want to be judged? 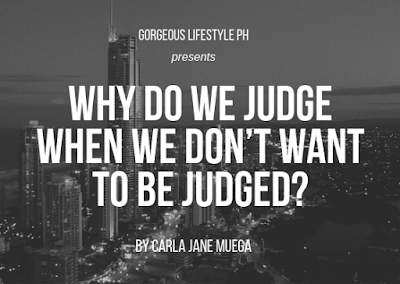 That is the question that popped in my head while thinking of people doing actions that are considered wrong by others and by the society.

Do we feel nice if we judge people? I guess we just feel righteous. We can say that they should have done what is right but they chose to do what is wrong.


Do we still feel nice or righteous if we get judged by people? Certainly not, in contrast we feel awful. Mainly because people judge us for the wrong things we do without even asking us what makes us do those things, not that we blame them for our own wrongful actions, but we want them to at least understand us in some way.

This led me to a thought so deep you don’t even want to try diving into. Of course that’s a joke so don’t judge me. Again, I’m just kidding.

What if instead of judging people, let’s try to encourage them to do better next time? Let’s help them forgive themselves and move on from the failure? Why don’t we teach them to learn from their mistakes and avoid ma…
Location: Iloilo City, Iloilo, Philippines
Read more
More posts